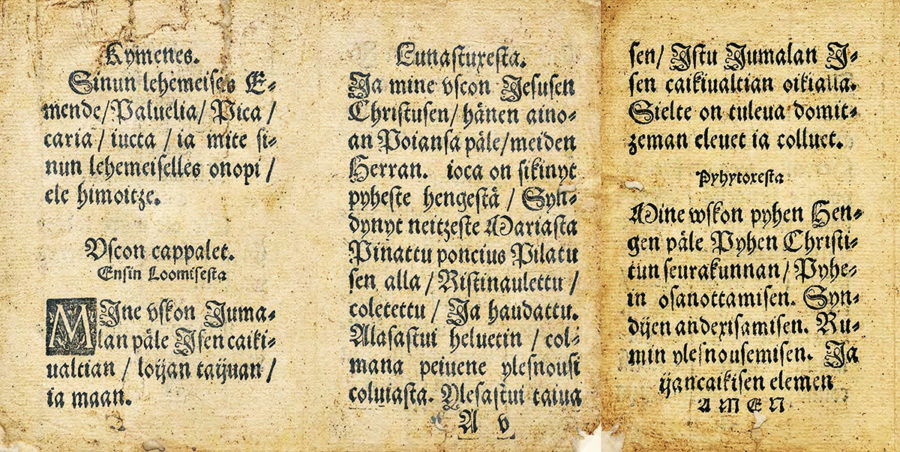 English translation of the opening poem:

“Learn now, old and young, who have a fresh heart, God’s commandments and the mind, so that you shall know the Finnish language. Law, it makes the soul fearful, but Christ soothes it again. So read from here good child, the beginning of learning without obstacles. Remember them all your life, so Jesus lends you his mercy.”

The poem was adapted from the work of Melanchthon, with Agricola obviously editing it for a Finnish context.[5] The primer displays all the letters of the Finnish alphabet and other textual information, lists all the Ten Commandments translated directly from Hebrew,[6] followed by a Finnish translation of the Apostles’ Creed.

In his translation of the creed, it is noteworthy that Agricola purposefully uses specific words when translating the section speaking about the church. Instead of “holy catholic church” (“pyhä katolinen kirkko”), he translates it as “holy Christian congregation” (“pyhä kristillinen seurakunta”) for the purpose of making a distinction between the idea of the Roman Catholic church with its lofty church buildings, contrasted to the biblical teaching of both the local and worldwide fellowship of believers in the church. The word “seurakunta” (congregation or fellowship) continued to be used by the other Finnish reformers in order to avoid misunderstandings.[7] The Abckiria also includes the Lord’s prayer, morning an evening prayers, and explanations regarding the sacraments of Baptism and the Lord’s supper.[8] The Apostles Creed in the Primer

Not even one complete copy of the primer has survived to the present day, but it has been recovered by combining different fragments to make up the whole.[9] Due to its nature being a primer that was meant to be used for everyday learning, it is not surprising that the early copies would have been more damaged than other longer books which would not have been in as much heavy usage by the common people. For a long time, it was taught that all copies of the primer had been completely lost, until 1851 when the first eight pages were found in three parts, having been recycled to make up the stuffing of another book cover. The remaining pages were found in subsequent years, also being used in the cover material for other books.[10] This primer was the first of Agricola’s works,[11] and understandably so, since it was needed that the Finnish people would be taught the basics of literary Finnish and the essentials of Christian teaching, before they would be able to read and appreciate the New Testament itself, which Agricola had already started working on during his time in Wittenberg.[12] In fact, when writing his primer, he had already completed the early manuscript for his New Testament translation, and was likely referring to this translation when putting together the primer.[13]